The Traditions of Duck Hunting

Tradition plays a larger part in hunting than pretty much any other sport out there. From a time long before I could even hold a shotgun, I would go with my dad down to the Mississippi River Bottoms to scout for ducks. I was always so excited to get to go with him and do something that I thought was strictly for “older kids”. I couldn’t wait until the year that I would finally be able to go with and see what duck hunting was like for me. My dad grew up hunting with his father and grandfather and passed the tradition along down to me and then my brother once he was old enough to go with us. Getting to go 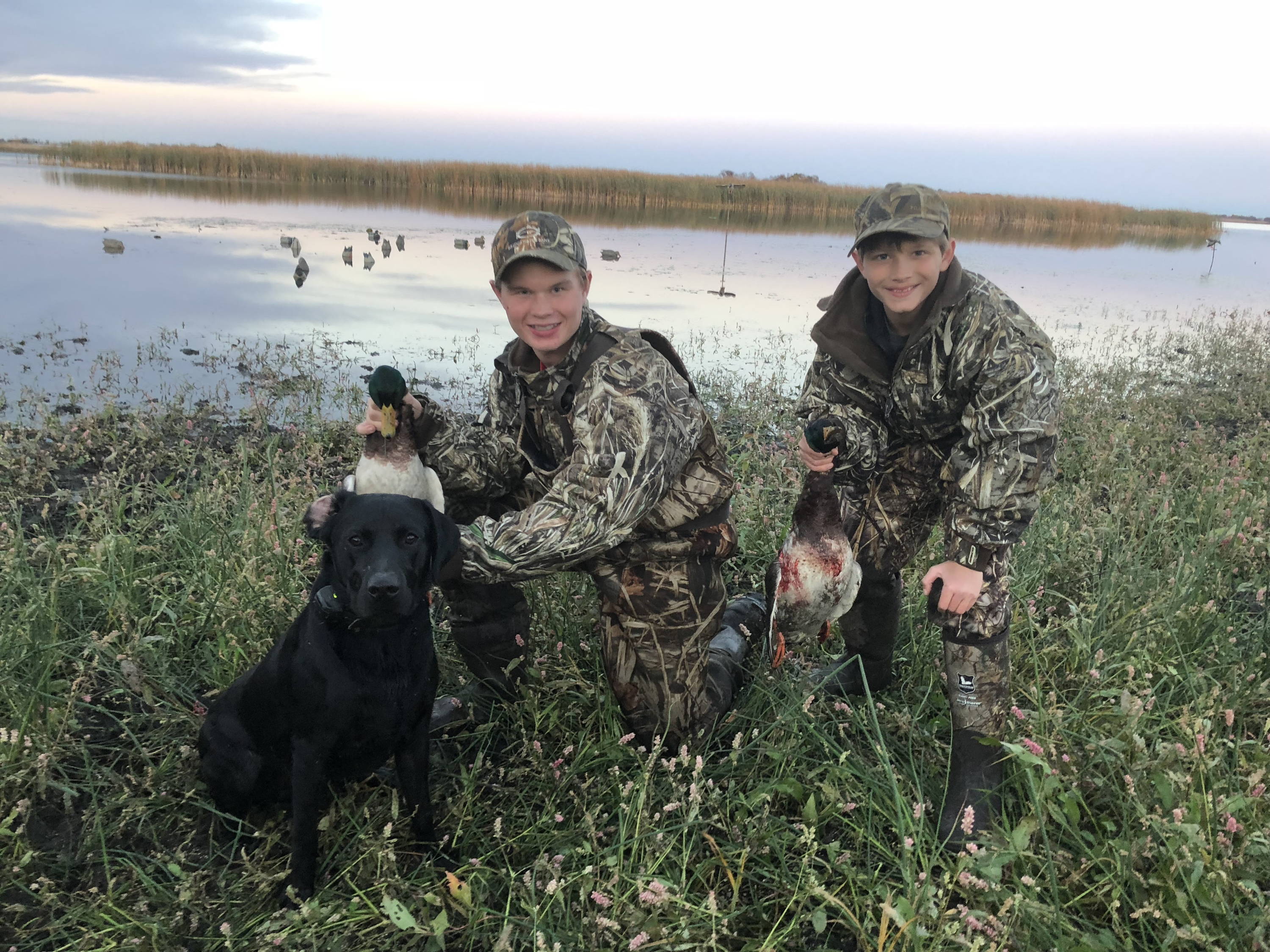 with and just sit in the boat for those first few years was so exciting to me. I went with for something like three years before we even got to take a shot at a bird, just sitting and waiting for the mere possibility for a duck to fly past was enough to keep me coming back year after year.

For my eleventh birthday, my dad gave me a shotgun just like his dad had done for him when he was that age. I couldn’t believe that I had reached the age where I would be able to shoot. The first bird I shot was a year later, down on the Mississippi River Bottoms in Hastings, Minnesota.

The first time I finally got to shoot a bird, was on a cold, windy, rainy, Minnesota November day, the best kind for duck hunting. We loaded up the truck and headed down to the river to see what we could find. Heading down there I was very excited because I knew this would most likely be our last hunt of the season because of the cold snap that was about to set in that next week. (in Minnesota our season can be very short some years because of a late October or early November freeze or snowfall) After we launched the duck boat and dealt with the old Evinrude motor, finally getting it to fire up, we were on our way out. We made our way up the river towards Grey Cloud Island. Once we got out to grey cloud island my dad started setting the spread and crashing about through the thin ice on the top of the river to try and make our spot look appealing to passing ducks. Once we got all set up my grandpa and I settled into lunch because we figured we would have a few hours before the evening birds picked up. We thought wrong though because not even five minutes later two large mallards flew right in front of us and pretty much stopped in front of my grandpa, who was still too busy with his sandwich to notice until it was too late. Before this hunt, I was only allowed to have one shotgun shell in my gun, but my dad realizing it was most likely the last hunt of the season, and wanting me to get my first bird, told me to throw another one in the old over-under. For the next few hours we sat waiting, listening to the sound of the wind howling down the corridor of the river and hearing the small ripples in the water hitting the plastic of the decoys. 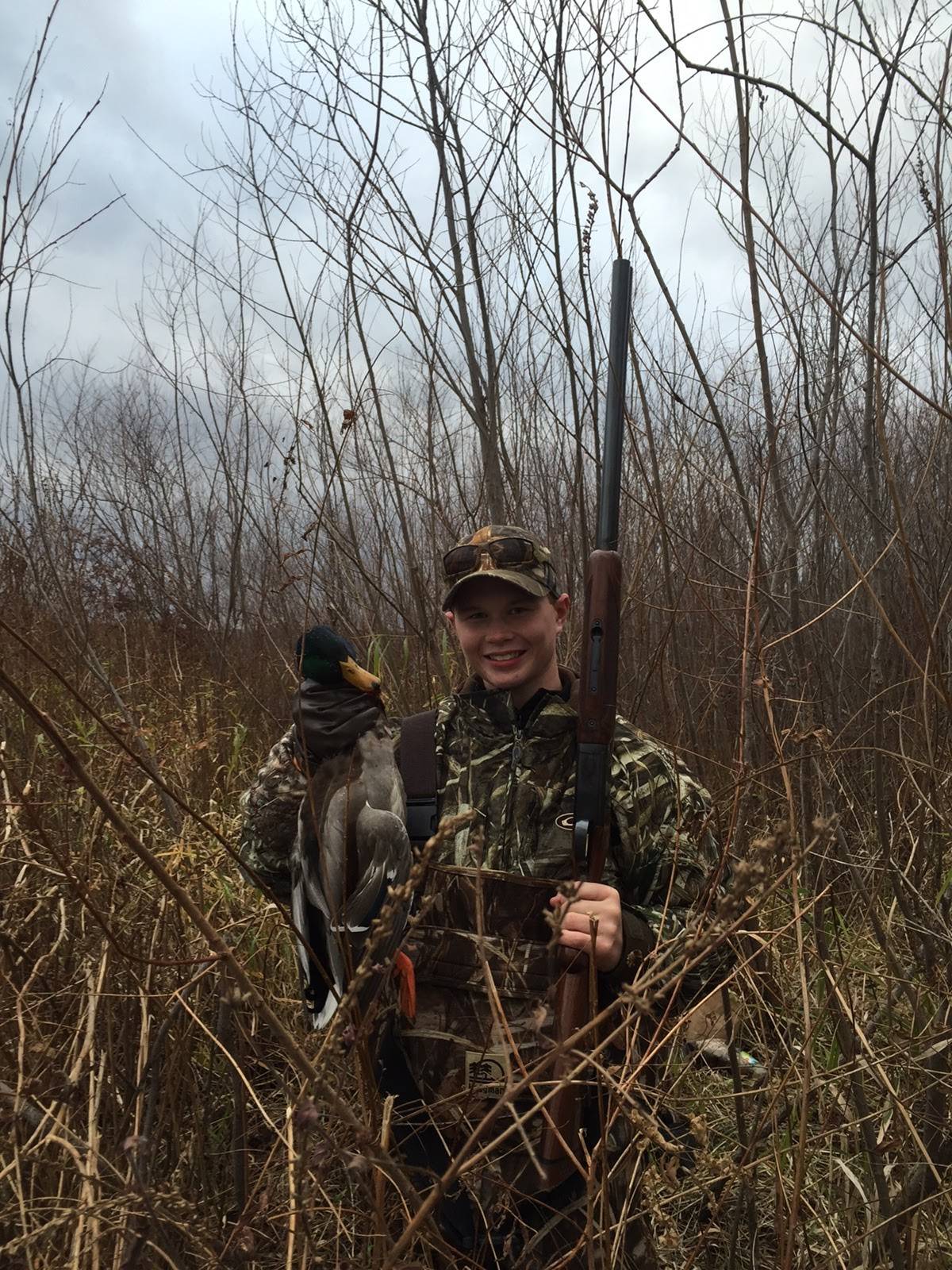 Finally, about forty-five minutes before the sunset, we saw a pair of mallards circling our spread. After waiting for what seemed like an eternity my dad finally yelled “TAKE ‘EM!” I raised my gun and squeezed the trigger feeling the gun kick back into my shoulder like a pissed off horse. I missed. Remembering I had a second shot though, I lined up for the Drake of the pair and squeezed again, BOOM went the gun, and I watched the bird fall into the thicket behind us. After my dad went and found it he came back to me and said, “Well Jack, here’s your first bird! I didn’t shoot at that one, and the way it fell you had to have been the one to hit it!” the feeling that I had at that moment was indescribable. I had finally accomplished the thing I’d been waiting for years and years to do.

Years later I still remember this feeling when I’m on hunts with buddies of my own. Even though my grandfather no longer duck hunts with us as much anymore and getting time to hunt with my dad has become more and more challenging over the years because of all that goes on during the fall, I still remember the traditions and values about hunting they instilled in me, that still stick with me to this day. Without my dad and grandfather, I would’ve most likely never started hunting, it’s a sport that takes a lot of time, money and commitment to get into, and one that must be taught for the most part. Sure, a guy can go buy a boat, a shotgun, and decoys and go try and set a spread on a lake or river, but knowing how exactly to set up the spread, how to face yourself with your back to the wind and when and how to call the birds in are all things that need to be taught in person. Reading books and watching shows about hunting can teach a lot, but there is no substitute for generations of knowledge that is passed down from father to son.

Now being the youngest one on the team here at Drake Waterfowl, I’ve gotten the chance to learn so much more from so many different seasoned hunters. I’ve learned about their traditions and how they got into the sport. Even though we are all from different generations, different parts of the country, and different walks of life we are all able to share a love for the same passion. The tradition of hunting is a special one, it brings people together year after year to create memories and stories they will tell for a lifetime. It helps to reengage people into the wilderness and allows them to escape from the rat race of life, and finally, it allows us to spend time together with our friends and family we might not otherwise see very often.

Jackson Snyder is originally from the suburbs Minneapolis, Minnesota, and grew up duck hunting on the Mississippi River Bottoms, and the lakes of Minnesota. Besides duck hunting Jackson also enjoys pheasant and other kinds of upland hunting. Jackson is also currently the youngest contributor at Drake, and is also currently pursuing a marketing degree at The University of Alabama.